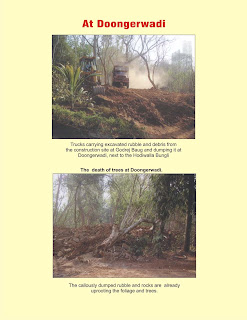 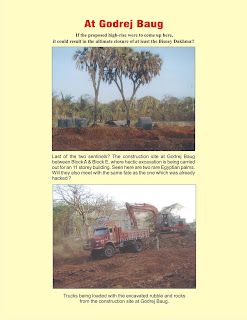 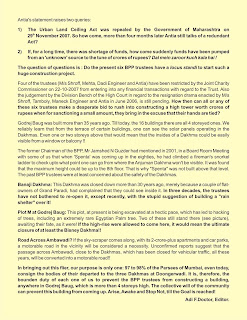 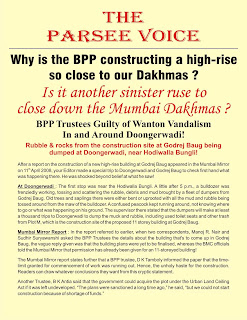 Read all about the recent goings-on at Doongerwadi.
From
The Parsee Voice


Our beloved Doongerwadi at Mumbai is once going to be in the eye of a storm.
A new 11-storeyed building is being constructed on Plot M in Godrej Baug. It is pretty obvious that people residing on the upper floors will get a clear view of the insides of Bisney Dakhma, which is currently operational. The next step will be a hue and cry about stench from the Dakhma and possible closure of the same as happened with Banaji Dakhma. This looks like one more nail being put in the Doongerwadi coffin.
All the debris from the construction site is being dumped on Doongerwadi lands near Hodiwalla Bungli, consequently destroying the trees and foliage. Pl. read attached report.
It is reported that looking at all the debris, our old 'friend' Dhunmai Baria of Dakhma photographs fame, gleefully proclaimed that the Doongerwadi ground now seemed ideal for burial purposes.
Assoc. Editor
Posted by Deen Parast at Monday, April 21, 2008 No comments:


As if getting egg on its face twice was not enough, FDU has raised its head once again. A third attempt is being made on 24th April 2008 to inaugurate the FDU's Information Centre in Udvada. The same being Adar Roj and Adar Mahino, a huge crowd of devotees will as usual be present in Udvada to seek Iranshah's blessings. FDU will then boast that this large number of community people graced the inauguration and market the event as a grand success.
Strangely, this time around, the modus operandi has changed. Gone is the fanfare and hype and publicity associated with the earlier two failed attempts. Everything is being kept under wraps and not a mention has yet been made publically.
What is even more painful is the fact that the FDU invitation mentions that Dasturji P H Mirza, High Priest of Iranshah and Dr Mehroo Bengalee will be Guests of Honour (?) at this event. Dasturji Mirza has all along opposed the FDU's presence in Udvada and is a signatory to two letters sent by the High Priests, condemning the FDU and petitioning the Gujarat Government to stop the FDU's activities in Udvada.  One wonders what has made him do a volte face!!!!
Dr Bengalee is the founder trustee of WAPIZ, an organisation formed to counter Deen Dushmani and uphold tradition. If she has decided to align with FDU, she has no business continuing in WAPIZ. It is a breach of faith.
It is about time they made up their minds as to which side of the fence they are on and acted accordingly. You can't run with the hares and hunt with the hounds.
Assoc. Editor
Posted by Deen Parast at Monday, April 21, 2008 No comments:

Names of Ahura Mazda with meaning popping up on your screen

How to display continuously on your computer screen, one by one:
Avestan and Pahlavi names of Ahura Mazda (from Hormuzd Yasht
and 101 names) with their English meaning:
Please see http://tenets.zoroastrianism.com/NamesAhuraMazdaPopup.html
for full instructions.
If you have done things right you should see a strip appear on your
screen (just drag it to where you like) with one of the names of
Ahura Mazda, and its meaning, The strip will stay for the seconds
specified and then a new name of God will appear with its meaning,
This is an excellent way to learn the meanings of the Names of Ahura
Mazda and also to sanctify your computer with the powerful names of God.
Posted by Deen Parast at Friday, April 04, 2008 No comments:

we have received a very informative post on significance of Meherangan
Day - Meher mah, Meher roz.

It also gives a good idea on Meher Yazad, Meher Yazad's roles and the
longest Yasht of all, Meher Yasht.

It also stresses the importance of speaking the Truth.

A reassuring paragraph says: "Meher Yazta, in unison with Khorshed
Yazata, spread the glory of Ahura Mazda all around the earth, leaving
no place dark for Ahriman to make even a temporary abode."

TO ALL MY DEAR HUMDINS - SOME RELIGIOUS INFORMATION FOR YOU

To sum up, Meher represents Ahura Mazda's LOVE, LIGHT and LAW ( the 3 Ls).
Jashne Mehergan is a celebration to remind us of this Divine Love,
Light and Law.

From: Tehemton B. Adenwalla
Date: Tue, Apr 1, 2008 at 9:36 AM
Subject: Re: [Traditional Zs] Fw: Cyrus day
To: TraditionalZarathushtris@yahoogroups.com

Thank you Mrs. VG for sending such a lovely photo and more important,
a very important write-up on the very First Declaration of Human
Rights, proclaimed by Cyrus the Great, some 2500 years ago.

What a splendour the Persian empire had!

What a lofty development of thoughts and embodiment of these ideas in
day to day life!

We should be all proud to be descendants of this great race, great
country and great civilisation - Persia and Persians.

On 4/1/08, v g wrote:
>
>
>
>
>
>
>
>
>
>
> Hello Dear Members,
> Just got back today and found this in my mail.... hope you enjoy it as much as I did.
> Really nice!!!!
>
> regards
> veera.
>
>
>
>
>
>
>
> Happy Cyrus day.
>
>
>
>
>
>
> twenty five centuries ago, when savagery was the dominant factor in human societies, a civilized and compassionate declaration was written on clay and issued to the "four corners of the world" that dealt with important issues relevant to the rights of humans, the same issues that not only in those days but even today can inspire those who believe in human dignity and rights.
>
> This document, known as "The Declaration of Cyrus the Great," emphasized on the removal of all racial, national discrimination and slavery, bestowing to the people, freedom to choose their places of residence, faith and religion and giving prominence to the perpetual peace amongst the nations. This Declaration could actually be considered as a present from the Iranian people, expressed through the words of Cyrus, their political leader and the founder of the first empire in the world, to the whole humanity. In 1971, the general assembly of the United Nations recognized it as the first Declaration of Human Rights, thus, registering such an honor to the name of Iran as the cradle of this first historical attempt to establish the recognition of human rights.
>
>
>
>
> The world's first declaration of human rights,
> by Cyrus on his coronation (October 29th, 538 B.C.)
>
>
> Now that by the assistance of Ahura Mazda (Supreme intellect, God), I am wearing the crown of kingdom of Persia, Babylonia and four directions, I acknowledge that:
>
>
>
> Till the day I am alive and Ahura Mazda supports my kingdom, I shall cherish the religious and traditions of the people whom I am their king and I shall not allow my appointed rulers and subordinates to ignore the religions and traditions of other people, or despise them or contempt them.
>
>
>
> I, from today that I am wearing the crown till the day that I am still alive and Ahura Mazda protects my kingdom, shall never impose my rule, or not, and if they reject it I shall not insist on ruling them and I shall not make war.
>
>
>
> Till the day I am the king of Persia, Babylonia and countries in four directions, I shall not allow anyone to do injustice to others and should anyone do injustice I shall do the justice, and I shall punish the offender. Till the day I am the king, I shall not allow anyone to alter the wishes or take the properties of others, except after compensation or consent of others.
>
>
>
> Till the day I am alive, I shall not allow anyone not to pay for one's labor and without paying one, shall not force one to work for him.
>
>
>
> Today, I acknowledge that everyone is free to follow any religion one selects, live at any place, but one shall not be free to take other's property by force. One is free to choose any profession and use one's assets as one wishes. Provided not to cause any loss to others.
>
>
>
> Till the day, by assistance of Ahura Mazda, I am the king, I shall not allow that men and women be traded as slaves. My appointed rulers and my subordinates shall prevent the trade of men and women as slaves and the traditions and the trade of slavery shall be uprooted in the world.
>
>
>
> I acknowledge that: Everyone shall be accountable for one's behavior and nobody shall be penalized for another's crime. Therefore, it shall be wrong to punish innocent brother of the offender. Should the member of a family or tribe commit a crime, only the felon should be punished and not the others.
>
>
>
> I hope that Ahura Mazda will bring me success to perform my pledges to the people of Persia, Babylonia and other lands of the four directions.
>
>
>
>
>
>
> --
> Pervin