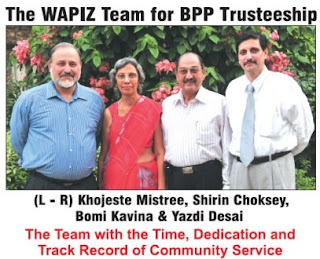 I have read the notice of the election of BPP Trustees by Adult Franchise.

The Parsis came to India to preserve their religion and the ethnicity
of the Community instead of succumbing to the Arab onslaught. Since
centuries, we, the descendents of those who sacrificed so much to save
our great Religion, have acted to preserve these two aims.

Now is the time we need to ensure that the candidates for Trusteeship
of the BPP are totally and unequivocally committed to preserving our
ancient customs, traditions and rituals. Our unique system of disposal
of the dead by the use of the Dokhmenashini is not something that can
just be changed at the whims and fancies of a few self styled "elite"
persons. In this regard, I commend WAPTZ for having the dedication to
very clearly state that they totally endorse the system of
Dokhmenashini.

We cannot allow the Trusteeship to fall into the hands of persons who,
though highly educated and qualified in their individual fields, are
quite illiterate and inept in matters of religion.

A very important anecdote can be read from the letter J had addressed
to the BPP to be read out at the condolence meeting for Late Field
Marshall S. H. F. J. Manekshaw, (which was not read out).

When the Field Marshal retired from service and settled in Conoor
(near Ooty), J was asked to perform a Jashan in his house, to which he
had invited a host of friends. Being an orthodox priest who does not
perform Jashans in the presence of Non-Parsees, I humbly requested the
Field Marshal to invite his guests after the Jashan ceremony was
concluded. His reply struck me with its profound humility. He said,
"In the army I may be an important person, but when it comes to
religious matters, I will respect your request." He then immediately
instructed his secretary to inform the guests to come a little later.

I wholeheartedly back the panel of nominees for BPP Trusteeship
supported by WAPIZ in their endeavour to serve the Community.

I pray to Ahura Mazda to guide the Community in this hour of need.

Posted by Deen Parast at Saturday, September 13, 2008 No comments:

Protecting the Trust, Preserving the Traditions

I am contesting for the Trusteeship of the BPP and have enclosed by
statement and vision for the future. I have served the BPP honestly
and diligently the past 14 years, spending 4 to 5 hours every working
day meeting the poor of our community as well as on the affairs of the
BPP.

I have intimate knowledge of issues concerning the community such as
housing, education, youth affairs and community welfare.
My statement and vision for the future is comprehensive and not only
focuses on the work done but provides a roadmap for the development. I
would be grateful if you could take a little time and go through my
website http://www.dinshawmehta.com

It includes my message, manifesto, past record of service to the
community as well as my future vision.

Posted by Deen Parast at Saturday, September 13, 2008 No comments: