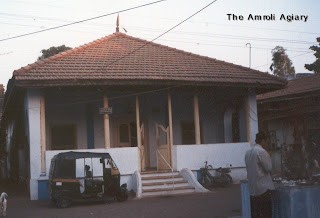 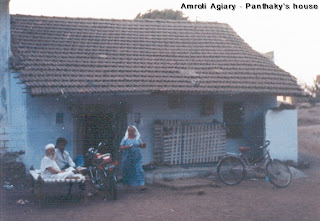 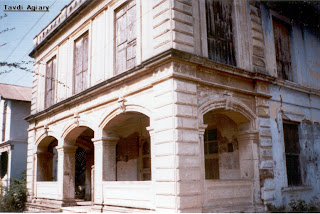 Amroli is a pleasant small town-village, which had a very distinct
identity of its own in the earlier days, but now it is regarded more
or less a suburb of Surat. It has its own railway station, which is
the first station after Surat while travelling north to Bharuch.

The agiary is managed after by the Mandviwalla families, and I believe
it is Kaizad who is the Ervad there. His mother Mrs Mandviwalla is a
very open hearted lady and would welcome any visitor from outside
Amroli who comes to pray to this Adaran. She would make the
arrangements for a jaali on the koova (well) if requested.

Humdins who go all the way may like to find some time from their busy
schedules and pay a visit to the Amroli adaran when they go to Surat.
They will be rewarded with a very pleasant and spiritually charged
memory of the whole trip. The Mandviwalla family too would be
delighted to have Zarathushti visitors come and pray in their agiary.

Tavda was a once bustling village on the outskirts of Navsari. It has
a sizeable Parsi population and even mohallas where Parsis stayed and
prospered. Many of them sadly moved away to Navsari, Mumbai and some
overseas. Today the magnificient agiary structure stands as a proud
memory of our presence in this serene village.

The late Mr. Mavjibhai Patel who passed away just recently in his late
80s, though a Hindu, used to fondly look after the agiary from the
outside, and prevent the local playing kids from damaging the agiary
building in any way. Mavjibhai used to stay opposite the agiary, and
today he is survived by his family. One of his sons Mr. Balvant Mavji
recently told me that the Tavdi agiary building needed structural
repairs and that perhaps the Navsari Anjuman should look into it.

Would someone please pass on this message to someone in the Navsari
Parsi Anjuman so that they could attend to the structural problem.

The Fire of Tavdi Adarian was shifted first to Navsari, and then later
to Godrej Baug in Mumbai. Though there was a lot of goodwill and
sacrifice on the path of the priests and humdins in moving this Fire,
the writer feels that many rules of consecration were broken during
this move. Shifting a consecrated Fire these days with all the
electric pollution and mobile phones in the vicinity is a very risky
exercise and can damage the consecrated Fire tremendously. These Fires
are not like furniture that they can me moved willy nilly at our whim
and fancy.

In 1885, the Parsi population in Bardoli was 10,000 according to Mr.
Giara's book, but now only 135 souls reside there. A sad phenomenon,
but something we ourselves are to be partly blamed because of our
excessive westernised ideas of bringing up children and in the last
two decades the craze of immigrating outside India.

I enclose some photos.